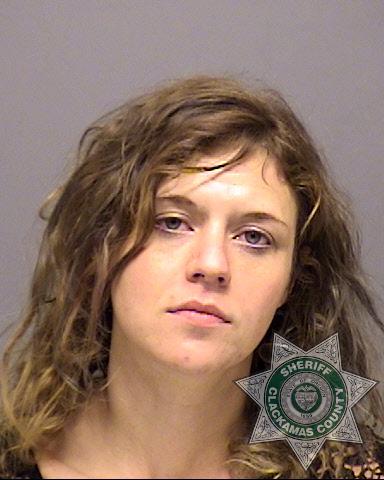 On Oct. 12, 2021, 35-year-old Sandy Faye Lenox was sentenced to 90 months in prison for her role in multiple residential burglaries occurring within the south county evacuation zone during last year's Clackamas County wildfires.

In the afternoon on Sept. 11, 2020, Clackamas County Sheriff's Office deputies were conducting enhanced patrols of impacted areas and evacuated zones during the Clackamas County wildfires, watching for potential burglaries and other criminal activity. Around 2:12 p.m. they were dispatched to a report of two suspicious individuals possibly walking onto a property on Ringo Road, near Mulino.

Deputies arrived and contacted several subjects. Two of them were James Dean Shotwell, 34, and Sandy Faye Lenox, then 34, no fixed address.

After an investigation, deputies determined that Shotwell and Lenox had stolen two gas-powered generators, a box of hand-tools including a cordless drill, two leaf blowers, and at least one gas can from a neighboring property.

Shotwell and Lenox were each arrested and transported to Clackamas County Jail on charges of Theft I and Burglary II.

This arrest soon led to the recovery of other stolen items, the development of separate cases, and additional criminal charges for Lenox:

Many of the victims in these burglary cases had evacuated their homes during the wildfires.

On Nov. 20, 2020, James Dean Shotwell pled guilty to second-degree Burglary and first-degree Theft in the First Degree regarding his involvement in the burglary investigation; Shotwell was sentenced to 18 months in prison at that time.

Our September 2020 news release on the enhanced wildfire patrols: "Tales from the #ClackamasWildfire patrols: hundreds of calls met by dozens of deputies; recent arrests detailed"